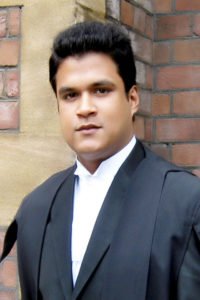 Mun is a seasoned lawyer having 11 years of experience in the jurisdiction of Bangladesh and is also a Registered Foreign Lawyer in the jurisdiction of England & Wales regulated by the Solicitors Regulatory Authority of the UK. Mun has an excellent track record as a litigation practitioner who regularly appears before judicial review benches and civil benches of the Supreme Court of Bangladesh, High Court Division. Mun frequently advises and represents government officials and private-sector employees in employment matters including unlawful termination & unfair dismissal, claims for wages, provident fund and other employment benefits. He has represented local and offshore clients in judicial reviews against the government, public bodies, quasi-public authorities, as well as complex civil litigations with a specific focus on matters relating to recovery of money, damages, compensation and contractual enforcement etc.

Previously, Mun was called to the Bar of England and Wales. Mun obtained his professional training and PGDiL from the City Law School at City University.  He also obtained his Bachelor of Laws degree from the University of London.